With the /poll command you are able to create, run and delete custom polls for your team!

Note:
Only team managers and admins are able to run the /poll command.

You can create as many options as you want; just be sure they are surrounded by quotes and the options are separated by a space.

You can see this information at any time with:
/poll
/poll help

Here's what the command /poll create "Example Poll" "Hello" "World" will post to the channel the command is run in:

Users are able to vote on the poll by pressing Vote on the option they want. If they attempt to vote again, it will change their vote from what they previously voted on to the new option they selected.

Users are also able to add comments onto the poll by clicking the comment button: 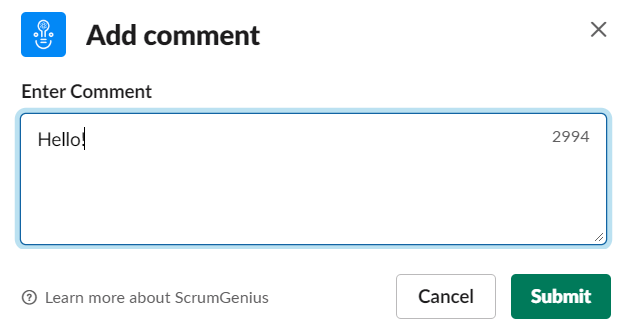 When they press submit, ScrumGenius will post a message as a reply to the poll with their name and message.

Did this answer your question? Thanks for the feedback There was a problem submitting your feedback. Please try again later.